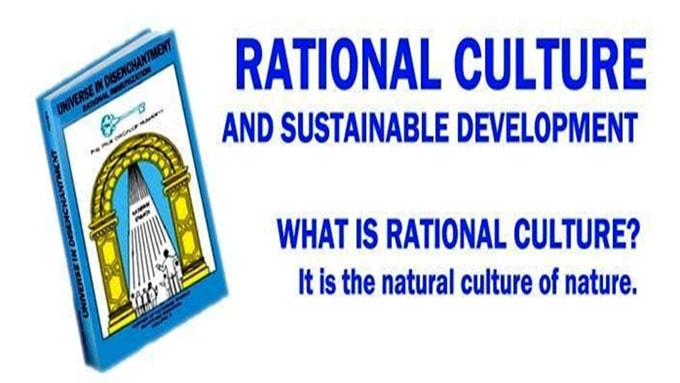 ​RATIONAL CULTURE
​
THE CULTURE OF THE COSMOS, OF THE RATIONAL WORLD, NOW ON EARTH
WHAT IS RATIONAL CULTURE?
It is the knowledge of the origin of the human being. From where one has come, how one has come, why one has come and the return to one's origin, showing how man will return to his natural state of pure, clean and perfect rational being. All this through the messages of the RATIONAL SUPERIOR an extraterrestrial being, published in the Books "UNIVERSE IN DISENCHANTMENT"
BESIDES THE RETURN TO ONE'S ORIGIN, WHAT WOULD BE THE OBJECTIVES OF THE RATIONAL CULTURE?
To connect the human being to his World of Origin, the RATIONAL WORLD, through the Rational development which is attained by reading and re-reading the Books "UNIVERSE IN DISENCHANTMENT". The reading of the Book brings the perfect physical, moral and financiaI equilibrium to the life of matter, that culminates with the Rational Clairvoyance, when the reader will get in touch with the Inhabitants of the RATIONAL WORLD, the world which we are native of and to which we are now returning.
HOW CAN ANYONE VERIFY THE REALITY OF THE OBJECTIVES OF THE RATIONAL CULTURE?
Very simple: because of being a process of development, it will not be just through the reading of the first volume of the Book that the person will have these verifications, although they have happened to many persons. They are the appearance of lights of divers hues, sizes and formats; the direct contact with extraterrestrial beings, having dialogues and being oriented everywhere. And that which is more important, which is to acquire ife inner peace.
It is how we start to learn what is true hoppiness. That which had long been announced by the prophets, sages, astrologers and by science has code to the world.
I transcendental knowledge that surpasses all the expectations of the human knowledge and which discloses the mysteries of nature and of the Rational animal in a simple, clear and logical form. It is not a knowledge extracted from the learnings of this world, but the truth of truths given by the RATIONAL SUPERIOR.
The RATIONAL SUPERIOR will lead humanity to the UNIVERSAL RATIONALIZATION. And thus, with the assiduous reading of this knowledge, everyone, without any effort, very naturally, without the need of attending any place, will be oriented in everything, receiving the orientations required for one's perfect moral, physical and financial equilibrium, inside one's own home or wherever one happens to be. Therefore, there is no temple, synagogue or house of preaching, nor obligations, for it is just the reading of this grandiose Literary Work "UNIVERSE IN DISENCHANTMENT" that gives the protection which up to now no one had known.
THERE ARE NO MIRACLES IN THE RATIONAL CULTURE
All the diseases that exist in the world are caused by the alteration of the biomagnetic field. The world is an assembly of eletromagnetism and consequently we are also formed of eletromagnetism. It is the alteration of this energy field that causes in us all the diseases like the cancer, the infarct, the osteomyelitis and each and every kind of illnesses. The excess of magnetism kills, the excess of electricity kills the same way. And we are subject to the effects of these two monster fluids: the electric and the magnetic.
There are no miracles in the RATIONAL CULTURE, everything happens naturally, the solutions are the consequence of the perfect equilibrium which the person acquires through the reading of the messages of the RATIONAL SUPERIOR.
As the person goes on reading, one comes to be connected to one's World of Origin, the RATIONAL WORLD, from where one will receive all the orientations required for one's good living. With the development acquired through the reading, the person starts to disconnect oneself from this eletromagnetic assembly which is the world we live in, in order to be connected to one's true natural, the world of one's true origin, the RATIONAL WORLD. Substituting one's eletromagnetism by the RATIONAL ENERGY, reaching the condition of the RATIONALLY IMMUNIZED and when one dies, one will no longer be born here in this world, but in one's true world, the RATIONAL WORLD.